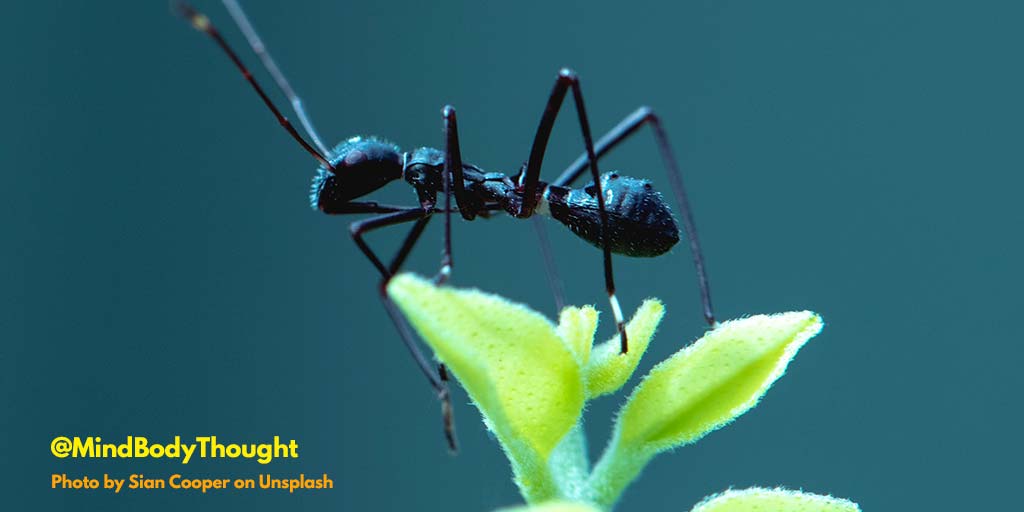 How on earth can anyone be triggered by ants? I’m not talking so much about ants outdoors, but the ones you find indoors. Yes, I realize they have every right to exist in this universe, but they got to me the other day.

Living in Florida, it seems like we have more bugs than people. Ants are just one of those things and up until the other day, I never thought much about. They were just annoying to me when I’d see them get into the house.

Years ago when I first started seeing Dr. Canali, I struggled with the feeling of a sensation where I would feel ants crawling on me. I really didn’t connect anything at the time that I was triggered by ants, but now looking back, I think there was more to it than I realized.

At the time, I thought it was just a creepy-crawly sensation down my legs. I never understood it but as I went through the therapy with Dr. Canali, these sensations went away on their own.

However, the other day, they returned.

One important note before I talk more about being triggered by ants is that I’ve dealt with skin issues, itching, and rashes. Most of the time I could not understand where it was coming from or why I was experiencing it. Yes, there are some horrible stories that connect with it, but it seemed like there was more than meets the eye.

Being Triggered By Ants

So let’s fast forward to the other day when I was triggered by ants.

One of my cats has her dish somewhat close to the door. Every now and then ants find their way into the house and they of course head for her dish.

We use one of the electronic feeding dishes and so the ants burrow inside it and under in and around it.

No matter what I did, I was not able to get the ants to stay out of her dish. It was completely frustrating. Of course, she didn’t want to eat the food overtaken by ants.

After a few days of trying to get rid of the ants, I was in tears. I was frustrated and angry. Little did I realize I was being triggered by ants. They seemed like one of those minor annoyances in life.

The next thing I know, I felt like I had ants crawling all over me. Even though I didn’t, I could not convince my body that there was nothing on me.

My skin started feeling warm and almost itching. My anxiety levels went way up to where I could not sit or stand still. No matter what, my brain was focused on the ants crawling all over me, even though they didn’t exist.

Being triggered by ants escalated to the point I had to go and take another shower. In fact, I had just gotten out of the shower, but it was the only thing I could think of to stop the sensations. It makes me feel weird to even say that this is what I had to do.

After the shower, I felt much better but by that time, the damage had been done. The memory had been triggered.

Trauma Memories Of The Babysitter And Ants

The next thing I noticed was the flash frame images that flooded my mind. I believe this where the moment started for me of being triggered by ants and most likely a lot of my skin issues.

A long time ago, when I was a very little child, my older brother and I were looked after by a babysitter. I kind of remember the house but not the person, as I was just too young.

However, the thing that was done to me is where this trigger starts. From what I know and from the story that was repeated to me by my parents, the babysitter would lock me and my brother in separate closets. We would sit on the floor and wait until our parents arrived to pick us up.

I remember it being fairly dark in there, but some light would shine through the cracks under the door. Worst of all, I remember ants and other bugs crawling all over me. Triggered by ants starts at this moment.

There was no one to save and rescue me. It didn’t matter if you screamed out for help, no one would let you out. I’m not even sure we were allowed to get out to go to the bathroom. I believe that we would just urinate inside of it and then the babysitter would get mad at us for making a mess.

If you did scream for help, they would bang on the door and tell you to be quiet. Crying didn’t help.

One day I guess my parents arrived early to pick us up and that’s when they found what the babysitter was doing. I know we never went back there after that, but I’m not sure anyone reported this lady.

I was so young that I don’t remember a lot more detail than this, but I know it happened.

For me, I’m not triggered by ants when I’m outside. It is only when I’m inside.

None of this came back to me until the other day when I was trying to clean the feeder off from the ants. Then it hit me like a ton of bricks.

Since that point, I’ve felt very depressed and angry. My anxiety is through the roof. I can’t seem to cry even though I want to cry. I feel like a mess at the moment.

So, I’m recording this story about being triggered by ants so I’ll have it to share.

It amazes me some of the stuff that was done to me as a kid. I get so angry at the ones who did this. It isn’t easy to move past it as I live with the effects of it each day of my life.

My Body Still Deals With Being Triggered By Ants

Triggered by ants is what my body still has to deal with and no matter what I get my mind to focus on, my body struggles because it remembers.