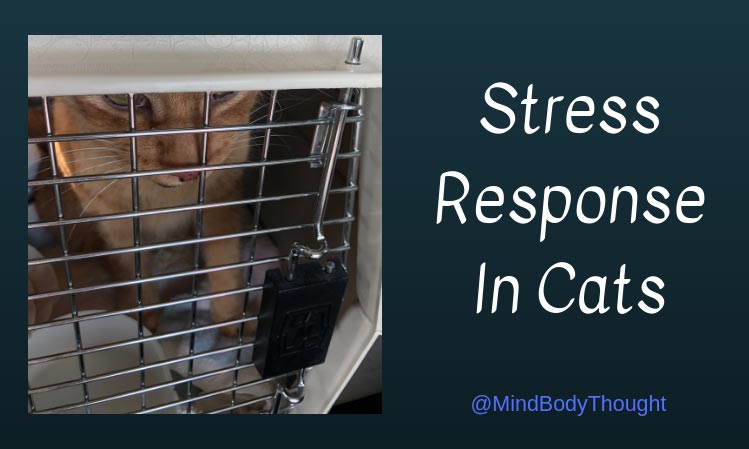 Don Shetterly 0 October 3, 2018 12:02 am
Can Everyone Be So Right And Yet So Wrong?
Numbing Is Not Dealing With Stress
Ways To Relieve Stress

While I never like to see my cats sick, today I got to see the stress response in cats.  Fortunately, he is doing better, but this is the story that I observed.

Today we had to take our cat to the vet. He’s a beautiful orange cat that has an endless supply of love. Lately, he had been struggling with his ear, and until the past couple of days, we were not sure what was going on with him. It was so subtle.

He was growing lethargic, wanting to hide which is unlike him, beginning to sneeze a lot, shaking his head a lot and was just restless. We could tell he was not himself.

So we took him to the vet, and it was found he had an inner ear infection. The vet helped clean the ear out and gave him some medicine, and we headed back home.

Stress Response In Cats – Started In The Cat Carrier

As we put Corey into the cat carrier to go to the vet, he started to meow.  He did not like being manhandled even if it was for the best.  The visit to the vet went pretty quick and smooth.  On the way home, he was panting harder and harder and meowing.  When we got inside the house, we let him out of his cat carrier.

He was agitated and relieved to be back home but not at all happy with the situation.  I think he was a little dazed and confused as to what happened, but either way it was very traumatic for him.

Topanga, Corey’s sister from birth that we adopted along with him, saw that Corey was freaking out. These two are not used to be separated from each other and the hour apart added to the trauma.  When Topanga saw Corey freaking out, you could see her demeanor change in her body.

She was high on alert as if there was a threat around but you could also tell that she was confused as she could not identify what was wrong. Her body was full on in survival mode waiting to do whatever she needed to do to escape the unknown threat or help Corey.  I found I had to talk to her as much as Corey to help both of them calm down.

Corey’s panting continued for a little bit, and then it started to subside.  He was still breathing rapidly but starting to go to the parasympathetic response where he could lie down on the floor and rest a little.  As he did this, the breathing began to slow down.  It took some time, but you could see the breathing continue to decrease and his body beginning to go into a more restful moment.

Topanga still wasn’t sure what was going on, but she was hanging close to us and keeping an eye out. She still thought there was some threat in the house while there was not anything present.

This scenario shows what happens in trauma.  We (or in this case, my cats) are on full alert when a threat is present or perceived to be present.  If we allow it to dissipate like the cats were doing, the energy of the moment can move through us.  It may be that some of the residual energy will remain, but not to the same degree it would if this process had not unfolded.

With our cats, I run and play with them to get their body engaged and activated.  It helps relieve stress for them and dissipate what happened.  Fortunately, animals don’t let their belief systems get in the way of as stress like humans do.

We could all learn a lot by watching the process in animals when they deal with stress. If we are conscious and aware, we’ll see it unfold.  This is how the human body is supposed to work but when we’ve gone through situations and experiences or toxic stress, we interrupt this process which leads to all kinds of mental and physical and emotional health issues.

The more we can connect with our body and what we experience internally, the more we can release the energy from stress and trauma.

In case you’re wondering, our precious orange cat is doing much better.  He’s back to himself and playing and loving as much as he possibly can every second of the day.