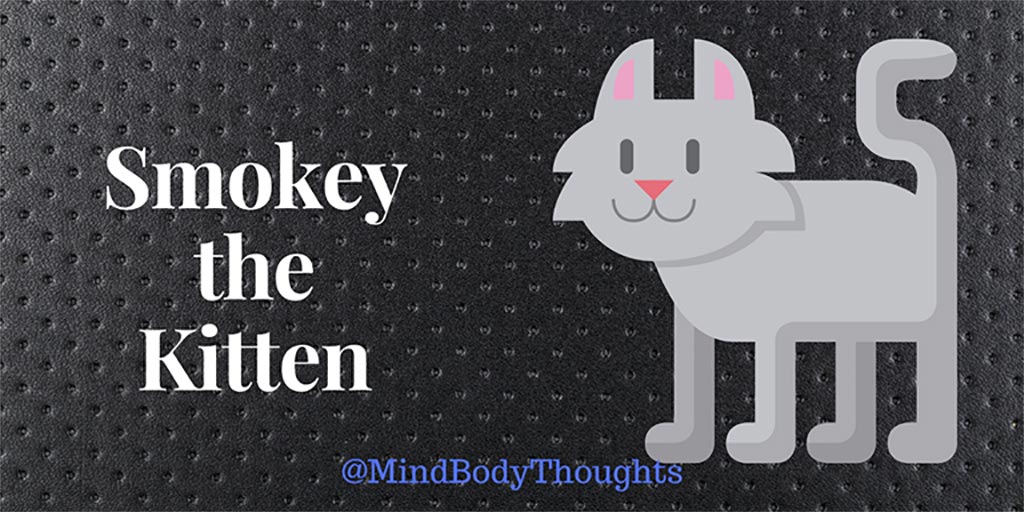 Singing “On Top Of Old Smokey”, all covered with snow…. Humm…humm…humm (as I dedicate this song to smokey the kitten).

A Kitten Named Smokey
On Top Of Old Smokey
I’ll Never Forget Their Screams
Big Boys Don’t Cry
I Hate The Monsters In Life!
Remembering Smokey, The Kitten.
Read More In My Books

Yep, that’s the song that is going through my head on an endless loop.  I don’t even know or remember all the words to it, but the tune is deeply engraved in my mind.  It plays on a continuous loop without skipping a beat.  All these years later, it plays on and on.

You see, I once had a little kitten.  Smokey was part of a litter of kittens, and all of them were precious.  They lived down in the basement because that’s where their momma took them to keep them safe.  There was a little ledge near the door that had tiny space but was mostly dirt.  It was up and out of the way so very few things could easily get to it, and that’s where the kittens lived.

This one little kitten was fluffy and a beautiful charcoal gray color.  Smokey had gorgeous eyes and the cutest meow.  He loved being held in my hand and was always grateful to see me each day when I went to see him.

On Top Of Old Smokey

One of the songs that I would sing to him was “On Top Of Old Smokey.”  I would repeat it over and over because I named the kitten, smokey.  I often sing to my cats and other animals I’ve had.  They seem to like it.

Unfortunately, there was a big bad monster that lived in our house.  For some reason, he didn’t see cats and kittens the same way I did.  I thought the kittens were safe, but I was wrong.  The monster had discarded other kittens in the past, but I thought this time would be different.

I’ll never forget their screams as he slammed the cellar door on them squishing them to death until they could no longer meow.  I was inside washing dishes standing on the kitchen chair.  After all, I was too little to reach the top of the sink to do the dishes.  As my parents disappeared into the darkness of the night, I wondered what they were doing and why it was taking them so long to return.

It was the meows and the screams that I heard of these little kittens that ended quickly but seemed like an eternity just before they came back inside the house.  I wanted to know what happened, but I knew.  They tried to make it sound like an accident that the kittens were in the wrong place at the wrong time.  How that many kittens could have been in the little ledge of where the door shut at the same time, I could not understand.

I started to cry but was quickly told that big boys don’t cry.  It didn’t help to protest because that would only make the monster in the house feel more guilty and we could not have that happening.  I sucked in my tears, washed the dishes and ached deep inside for the little kittens.

My dad got rid of the evidence.  There was no way to say good-bye.  They were just gone before I knew it.

I ached deeply for little smokey and all the times I sang the song.

To this day, I can still hear their meows in their final moments of breathing.  I can hear the screams begging for help, and I was not able to save them.  They died even though I was just a few feet away.  My mind chastizes me because I failed Smokey and the other kittens.

The song, “On Top Of Old Smokey” continues through my mind.  I think of the little grey kitten I loved with the gorgeous eyes loving me as much as I loved him.

I wish my mind could forget.  If only it would have never happened.  To every animal I have ever been around, I promised that no matter what, I would give my life up for them.  No monster would ever take them away from me as this one did.

I Hate The Monsters In Life!

Later I would come to learn how this one moment caused so many issues in life for me and was the trigger for conversion disorder that almost took my life.

Read More In My Books

Hope And Possibility Through Trauma.