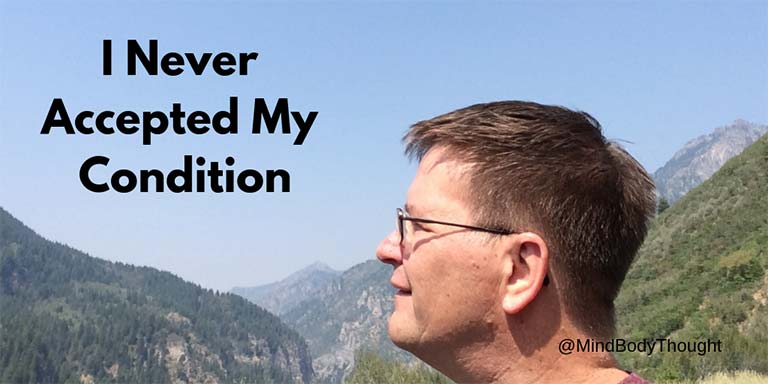 I Never Accepted My Condition

One of the things that kept me going all those years through the roughest of times was the fact that I never accepted my condition.

Don Shetterly 0 February 11, 2019 12:02 am
Paralyzed By Conversion Disorder
Avoidance In Healing
The Struggle to Awaken The Unconscious Mind

One of the chapters in my new book is titled “I Never Accepted My Condition”.

The book is one I just finished writing called Overcoming A Mysterious Condition.

Sometimes it is just too easy to buy into whatever condition or label we’ve been given, even though we struggle through a difficult health issue. While it is helpful to know what it is we are facing, if we are not careful we become the label. I understand that is a very small distinction, but in my I found it extremely important.

My Eyes Were Closed

Even though I thought I was in touch with my life and my body, the condition I went through showed me how much my eyes were closed.

It showed me that I didn’t know as much as I thought I did.

Dr. John Sarno said, “Once the patient becomes aware of the brain strategy to divert attention from emotions and onto the body, their physical symptoms usually disappear.”

The one thing I’ve learned in my healing is that Overcoming A Mysterious Condition means embracing that which I did not know. Like Dr. Sarno states, I had to begin understanding just how much the brain diverts of unpleasant emotions into the body.

It was as difficult as all get out trying to function and make it through my day. I wanted to give up. I had no energy to fight through this, and most doctors had no answers. So when I say “I never accepted my condition,” it’s important to note that it was not all step 1, 2, 3. It was a progression.

I Never Accepted My Condition

With time and a continued progression of healing, I saw my little steps of healing add up to bigger steps. I saw myself moving forward when it would have been easy to just lay down and quit.

One of the things that kept me going all those years through the roughest of times was the fact that I never accepted my condition. Life can throw some heavy curve balls at us, but work to find a way through them. Yes, your life may change in the process, but that is not always a bad thing.