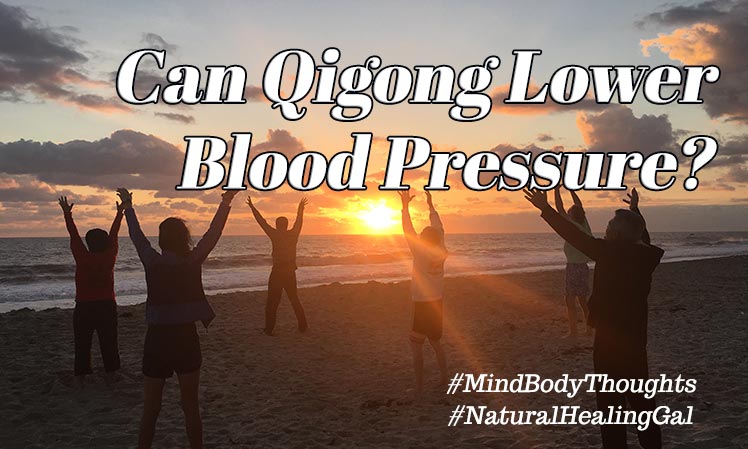 Some days are imprinted in my mind forever. One of those is how my husband and I went to our first Qigong class due to very high blood pressure.

Yoga was a passion of mine for a long time, but I got to a point where I was having some severe back pain and had to stop. Reading about Qigong made me curious. I had seen an ad for a sunrise class on the beach that was so inviting, but it was forty-five minutes from home which made it difficult to find the motivation to go.

I found the motivation very quickly that day.

Mike’s blood pressure had been borderline, and when we moved to Florida in 2005, his new doctor suggested it was time to begin taking a prescription to lower it. For several years he did — 10 mg lisinopril — and he was never able to get it below 140/85.

His doctor then retired in 2013 and sent him to someone new who suggested he change the prescription. When we followed her instructions, the difficulty started. His blood pressure began to rise and dip tremendously. She added new drugs — 12.5 mg of HCTZ diuretic. She changed dosages several times. As he took his daily blood pressure readings, the highs went up to 170/103, and the dip would be as low as 124/66 within one day. They could not get it to stabilize. It kept progressing to where he was visibly ill. I watched as his facial features sagged and some days he had trouble getting up off the couch.

As the days went on, he looked so sick I became increasingly worried. I asked him to go to a Qigong class with me. I had found one at sunrise on the beach, and I thought that it would be helpful. He did not want to go. He was so ill that he felt he could not stand up or walk to the beach. I remember saying “I am going. I don’t care if you stay in the car. At least you can open the window and breathe the ocean air. I will drive. Get in the car.”

He got in the car. He does not like to be a passenger, so he always drives. This time I drove and headed for the beach and the class. It was a beautiful morning, but I noticed that the walk from the parking lot to the ocean was far. I worried he would not be able to walk there, but he did, and we did our first Qigong class together. Our instructor was John Walcott of The Cloudwalker Place. We began going to Qigong class five mornings a week.

Our first class was March 7, 2014. From that day, his blood pressure began to normalize. Mike is very organized, and he had a daily chart written out with readings three times a day. He was quickly able to drop all of the new medications the doctor prescribed and went back to lisinopril, 20 mg, plus the diuretic.

My blood pressure has always been low. My doctor once joked with me that I needed to eat a hamburger and fries! When Mike took his blood pressure readings, I watched, and from time to time he wanted to take mine. We often joked about seeing if he could beat my reading.

Through March and April of 2014, his blood pressure began to come down quickly and became more regular. I am still amazed as I look at the chart he wrote out and see readings as low as 115/68. As low as mine! The last two entries in his chart were on May 1, 2014; 119/60, and May 14; 123/71. He did not have to write them down after that, as they were lower than ever and very consistent. To this day, his blood pressure readings are consistently low and steady. We still do Qigong five days a week.

As the year progressed, Mike continued to come off of all of the medication. Today he takes only one lisinopril at 10 mg. He is happy with that progress, and that is the only medication he takes. He will be 70 in September. If you ask him, he will tell you that the only thing that changed was doing Qigong.

I enjoy Qigong so much that I decided to become an instructor, and recently acquired my certification. The benefits of Qigong are far-reaching, from simple relaxation and stress reduction to helping detox the body. There are numerous other benefits. For me, it is like meditation in motion, my peaceful place. Today I teach Qigong classes.

Look for my new online class coming soon at Mikamar.net.