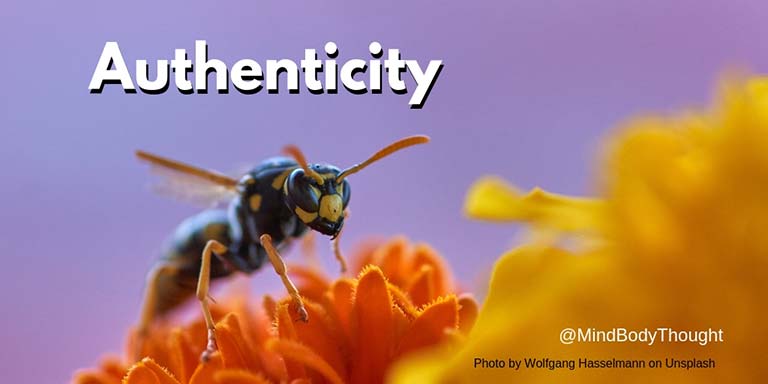 Authenticity Or Lack Of

We really need more authenticity in this world.

Don Shetterly 0 January 9, 2019 12:02 am
Seriously – Does Fear Hold You Back?
Normal Or Abnormal – Father Was In Poor Health
Are Genuine Friends What They Used To Be?

In the day we are living in, I see many examples of a lack of authenticity. It really is sad because I think that is part of our currency as humans. It is one of the things people see before they really know us.

I spot authenticity in people quickly. If the words they speak do not match up to all of their actions, then I am suspect of them. It may include what they say, write, and share, or even their body language and energy. Authenticity is one of those things that you know when you see it.

According to Dictionary.com, it is the quality of being authentic. It can also be referred to as genuineness.

I have seen people go and post things online that don’t match up with what they say in real life. They will tell you one thing to your face, but then when you see the things they share or post and say online, it is like you are seeing two different people. While they may believe they have authenticity, they don’t.

Another example is when people want to be friends with you and be of assistance, but their sole purpose is selling you something or getting you to buy their services. Yes, they may give a lot of “free advice” to everyone, but authenticity takes a backseat. It becomes nothing more than mere words to attract your attention.

There is the pitchman persona online, too, that tries to act all authentic. They get you to buy into their system or beliefs and the next thing you know, you’re on a mailing list getting pitches almost every day. Companies do this all the time and think nothing of it.

Others include the affiliate scams that run rampant across the internet. These companies are smart because they get people (also known as affiliates) to pitch their products. Of course, the affiliates cannot say anything bad about the product or they would get dropped. So, while their write-ups and reviews look great, authenticity vanishes with this practice.

Direct messages through Twitter or Facebook are another way people make you question their genuineness. They pass along the latest scams of the day or they want you to buy something. It isn’t about truly connecting with you, it is unconsciously just going through the motions. It becomes harder to trust or put much stock in what they share with you because you’re waiting for the other shoe to drop.

Another way has to do with reporting egregious behavior online to places like Twitter or Facebook or YouTube. I will say that I’ve seen Twitter take action when the behavior is way over the top. However authenticity is nonexistent with Facebook or YouTube, from what I have seen. They want you to report it, but more often than not, it never violates their rules. It makes me wonder if they are truly concerned or it is just a bunch of words and feel-good actions to make us believe they are.

I’ve seen people appear to act with genuineness when they say being gay is not a problem. Yet, with their actions and things they share online, it becomes evident that they will say one thing to your face and one thing behind your back. This is not authenticity.

There are people with beliefs that act one way but then do another. They purport to hold the truth but if you follow them throughout their day and life, you will see a much different picture. In fact, they try to hide their real life from most people because authenticity is not their friend. Many of the people that know them expect them to be perfect in all they do and cannot handle the fact that they are human. So, there is a problem with genuineness on both sides of this example.

I’m sure I could list many more examples and I’m sure you could also list many. There is no shortage of them, and we don’t even have to look at politics or the news or any of our community leaders for examples. We can find many examples in our everyday personal communications.

In these times, truth is no longer truth. Truth seems to be what you can get people to believe while getting away with as much as you can. I am appalled at what I see, since I strive to be truthful in everything I do and say.

I’ll never forget the boss I had one time that flat out told me, “If you can get them to believe it, then it is true.” After gasping at that, I was speechless. Yet, this same boss fed his “lies” and “half truths” to the general manager and I went from being a model employee to one that was put on probation. Truth and authenticity were not wanted in this company although they purported to expect it.

One time, I almost lost a job because the manager was cheating and I dared to stand up for the truth. Since the manager who purported to be almost on equal footing as God was the nephew of the owner, truth did not apply. I’ll never forget when I was told that I either needed to keep my mouth shut or find another job. Authenticity and genuineness were nonexistent since the company always made it clear that they expected every employee to act with high integrity.

What we say should match what we do. You may think you’ve got some people fooled, and many will swallow whatever you feed them. Unfortunately the mind and body know differently and too often we don’t listen to these things within ourselves. We ignore them as an unwanted guest in our lives.

I believe that even if we try to act as if authenticity doesn’t matter in life, it does. To me, the mind and body see it regardless of how genuine or oblivious we are. You can fool some of the people some of the time but not all the time. I think there is an inherent sensor in all of us, but far too many of us ignore it.

If you want to be taken seriously and genuinely, than you’ve got to walk the talk consistently in your life. You can’t do it part of the time and ignore it the rest. Authenticity is a way of life, not just a momentary thing you try to get others to believe.

We really need more authenticity in this world. There are far too many fake people acting as if they are genuine. It hurts the world as a whole because once truth is no longer the truth, how can you trust anyone?