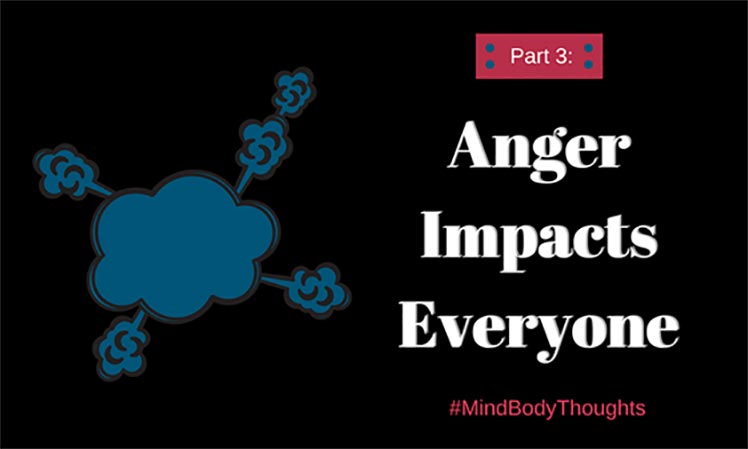 Whether you admit it or not, anger impacts everyone around you.  You may not see it, and you may not fully grasp what it does to those closest to you or in your job and community.

We only need to look at what happens online in social media or the news.  Watch the screaming people that think they are right or the protesters that believe they are right.  It is anger boiling over into all aspects of our lives.  Is either one wrong, not necessarily?  I’m merely pointing out just how anger is overwhelming our world.

When we don’t live in peace as a society, we don’t find peace within each person.  When anger is taking over, it is a reflection of what it has already done to the individual.

We hide from anger, and we try to trick ourselves into believing that everyone else is the problem, not us.  It has become so prevalent that we cannot even see that we do this.  If you are awake, you’ll see it at every street corner.  The thing is, we have to go in and look hard at ourselves if we want to deal with this issue.

Most of the time, we’re just glossing over it, so no one sees it, especially ourselves.  We may throw the tenets of religion on it, so we keep it hidden.  After all, vulnerability is not our friend because we’ve got to plaster the happy face on for the world to see.  We can’t allow others to see us as weak and so our anger takes over the control of our life.

Many people don’t know how to deal with it in healthy ways.  We fear it as if it is a bomb waiting to go off in our life.  We let it build up day after day, experience after experience until we explode.  Everyone else becomes the cause of our anger, not what we have lived through or bottled up.

Most people struggle to be around others that have anger because they have not healed these parts within their own life.  When you’re anger comes up, it triggers their anger that they are desperately trying to hide from view.  The only way they can manage their anger is to persuade you that your anger is wrong.  In fact, they may tell you that you should suppress it.  No, they don’t come out and say that, but instead, they offer up platitudes, memes, and happy thoughts.

I’ll never forget the person in Trager who did what I’m referring to in this blog post.  I had gone to a practice day with several practitioners.  It is useful to note that this is not the first time this person’s anger spilled over on to me.  When we started to share an update about our life, he assumed I was going to share triggering details.  I had not planned to do that, but he flat out told me that “no one wants to hear what you’re saying, so just stop.”  I was stunned, and of course, no one said, “hey that is unacceptable.”  They just let him go and smiled as if everything was fine.

I should have gotten up that day and walked out the door, but like a good person that I am, I stayed.  I allowed this person to walk all over me without standing up for myself.  You see, his anger triggered in me where I was taught to be quiet and take it, not showing the least bit of anger.

When I left there that day, I felt sick, and for the next few days, I did not feel well.  His anger was so toxic that it threw my energy off and triggered me so bad.  I never saw him again.  They purported to be some very well adjusted and healed individuals, but behavior like this is not proof of that.

You see, the anger was okay, but when he directed his anger towards me, that’s where it went off the rails.  It became abusive and harmful.  Everyone that didn’t stand up and say, this is unacceptable was at that point of being a willing participant in the exchange.

If we don’t go in and learn how to embrace it and let it go, anger impacts everyone.  The more we allow it to hide unnoticed like someone living your rental unit not paying rent, is harmful.  We do this without even realizing as we point the fingers at one another.  We justify that others are to blame when it is our anger that we have not learned how to deal with and find peace.

Please continue reading part 4  I Struggle With Anger published on May 2, 2018.