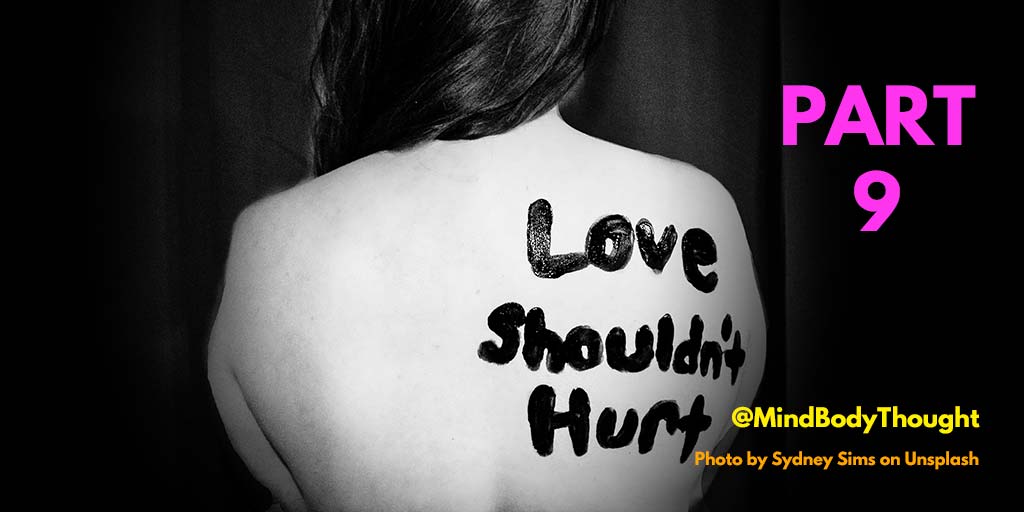 Explosive rage was an everyday occurrence from my dad. Domestic abuse was sprinkled in at random times.

You could call it a war zone, but it wasn’t. It felt like a circus, but it wasn’t fun. It was horrific, but normal, because these chaotic moments were all we knew.

There’s so much domestic abuse against my mom that I know happened and was confirmed to me, but it feels like it is blocked out in my mind. It is a gap in my memory, almost as if those years didn’t happen.

Yet, I know they did. I can see the scenes playing over in my mind, but it feels like it didn’t happen to me. I feel like the observer watching it from afar. The horrors to this day still haunt me and the memories are still as fuzzy as a foggy morning.

There were the times when I was cowering in the corner of the room or trying to hide under the table. The moments that I saw him beating my mom like she was a punching bag.

There were the moments where he would scream at her and hurl insults like she was somehow the enemy that needed to be taken down. Yet, all she wanted to do was love him and that’s how he repaid her for that loyalty.

It included some very derogatory remarks that he loved to make, both to her and around his kids. I will not even get close to sharing this on here because they were just too horrible. Let’s just say I grew up hearing horrendous things about women, primarily my mom. They disgust me so much but that was what normal was at my house.

It was never anything of significance that would bring on the domestic violence episodes with my dad. He would just lash out and go full steam ahead as if the speeding freight train had no brakes. It didn’t take much to set him off.

Of course, afterwards, he’d disappear. He’d storm out the door into the day and not come back for hours. Usually it would be long after we were in bed and then you would hear the screen door screech open.

You’d hear them whisper, trying not to let us know what was going on. The next day, they’d be all smiles as if nothing happened. It would all be fine with apologies and forgiveness until the next time. I’d hear over and over, “we hurt the ones we love the most,” as if it was justification for all of this.

He’d always ask her to forgive him and she always would. He’d promise not to do it ever again – until the next time. The scenario repeated and replayed over and over in our house.

While the events I’m describing may sound horrendous, I knew nothing else. It was the norm to me since I was old enough to remember. In the latter years, things would begin to settle down a little from when I was very young.

Explosive Rage On The Battlefield

I know that my dad practiced screaming along with explosive rage as if it was his only skill and talent. When he was in public or we were at church he would never do this, but at home it felt like a battlefield every day.

If it wasn’t enough that my dad did this, my older brother learned from him and carried it forward. He’d pummel me with his overweight body. He’d jump up and down on my shoulders and body with his knees as he had me pinned to the ground. He tormented me, screamed at me, raged at me just like Dad did. There was no hope for me in those days because while this was horrible, it was all I knew.

Neighbor Was Tired Of His Explosive Rage

One time, my dad wanted to borrow my neighbor’s tractor to do something. My neighbor lived a mile away from us across the fields. When my neighbor told my dad he’d bring the tractor over and help, my dad told him that there was no need. We could do it without using his help.

My neighbor insisted because as he finally told my dad, he was so tired of hearing him scream at us a mile away. The neighbor was tired of his explosive rage. He figured that if he was there, my dad would behave himself. This only infuriated my dad, knowing that someone was on to his hidden behavior.

Yet it didn’t stop it. Yes, the explosive rage and screaming stopped while someone was there, but it picked up when they left. It didn’t skip a beat.

Only The Lucky Would Escape

All I knew growing up was people would scream at you through explosive rage. If you were lucky and fortunate enough, you would escape the domestic abuse and beatings. However, escape rarely happened.

I remember my dad had some type of injury so when it came time to put in the garden, he could only watch from a lawn chair. I still to this day don’t remember what I was doing wrong, but he called me over, picked up the garden hoe and beat me with it.

Domestic violence wasn’t only for my mom. It was for us kids too! He was teaching me to listen and follow his instructions. Yet I had no clue what I did wrong and still don’t to this day. His explosive rage would be unleashed on us like a tornado ripping up the countryside.

My Dad Expected You To Know

If you were sent to the barn to get a tool and couldn’t find it because he never put it back in its place, you were the stupid one with no common sense to be able to find it. God forbid if you came back with the wrong tool.

It didn’t matter what the task or concept or thought or action was with my dad because no matter what, he’d scream and go into an explosive rage. It was like walking through a minefield knowing that a landmine would go off, but would you escape it or not? Most of the time you couldn’t escape it no matter how hard you tried.

His Explosive Rage Was Horrible

His explosive rage was horrible, and while it did lessen as the years passed, it never went away.

The domestic violence seemed to lessen as well, but then again, I finally left home for college. It may have continued, but there would be no way I would know if it did.

There was so much that happened in our home that even the inhabitants didn’t realize took place. Yet, it could not be stopped and it is almost never spoken of because if you sweep it under the rug, it doesn’t exist.